While Pete Townsend wrote most of the songs recorded by The Who during their long and illustrious career, there was another songwriter working away in the background, supplying the odd b-side and off-beat album track, and that was John Entwistle. Well-known for his quirky humour and stoic disposition, as well as his strong constitution which earned him the nick-name of The Ox, he produced some fine comic characters in 'Boris The Spider' and 'Silas Stingy', as well as more though-provoking songs such as 'Heaven And Hell' and 'Whiskey Man'. When Townsend was writing 'The Who Sell Out' he offered Entwistle the opportunity to write the jingles that he wanted to intersperse with his songs, and a couple of those are included here. Townsend obviously recognised Entwistle's talent for dark humour, as while writing 'Tommy' he asked him to pen the two songs about child abuse, as he felt unable to do so himself as he'd suffered this in his own childhood. Entwistle duly came up with 'Cousin Kevin' and 'Fiddle About', which helped in no small way to propel 'Tommy' to become the masterpiece that's it's recognised as today. For this collection I've gathered together the songs that Entwistle wrote for The Who between 1965 and 1971 - their classic period - and they fit nicely onto an album that shows he wasn't just one of the best bass-players (and rock french horn players!) ever, but could pen a mean tune as well. 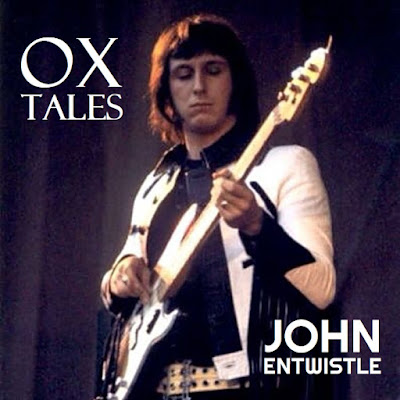 
I wanted to compile this as a stereo album, but a couple of the songs, such as 'The Ox' and 'Heaven And Hell', are only available in mono, so it ended up as a mixture of the two.

Email ThisBlogThis!Share to TwitterShare to FacebookShare to Pinterest
Labels: John Entwistle, The Who