By 1984, It's Immaterial had been reduced to a duo of Campbell and Jarvis Whitehead, who had joined in 1982, and in this incarnation they had their biggest hit to date, with 'Ed's Funky Diner (Friday Night, Saturday Morning)' on Siren Records, quickly followed by the four-track EP 'The Fish Waltz' on Situation Two Records. In September 1986 the band finally released their superb debut album 'Life's Hard and Then You Die', and their next few singles were tracks taken from the album, with it's opening song 'Driving Away From Home (Jim's Tune)' becoming their biggest hit and most famous song, featuring regularly on television adverts and 80's-based compilation albums. In 1990 they released their second album 'Song', which as before, was of a subdued, understated nature, with wry wit in the manner of an indie Pet Shop Boys. The album was a commercial flop, despite receiving positive reviews in the music press, but has been re-assessed in recent years and is now generally regarded as a worthy follow-up to 'Life's Hard...', and has brought the band a whole new raft of fans in recent years. Shortly after 'Song' was released the band ceased to be, but before they disbanded they did record a third album, provisionally entitled 'House For Sale', which was rejected by the record company. For the past few years Campbell and Whitehead have been crowd-funding on Pledge Music to have it released, and the last I heard was that by 2017 they'd reached their target, but so far it hasn't appeared. Until it does then enjoy the music of this massively under-rated band with these two compilations of some of their best work. 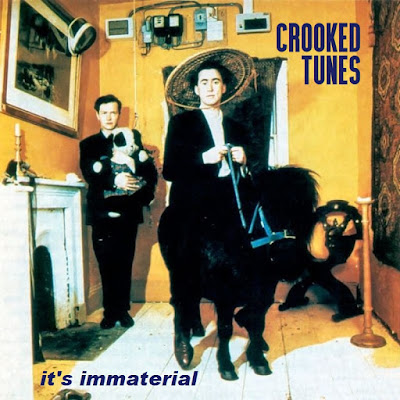 Email ThisBlogThis!Share to TwitterShare to FacebookShare to Pinterest
Labels: It's Immaterial