By 1969 George Harrison's songwriting had come on in leaps and bounds, culminating in him providing two of the most popular songs on The Beatles' 'Abbey Road' album. That same year he co-wrote 'Badge' with Eric Clapton, which was included on Cream's 'Goodbye' album, and on which Harrison played rhythm guitar, using the pseudonym L'Angelo Misterioso for contractual reasons. In May 1970 he played guitar on several songs during a recording session for Bob Dylan's album 'New Morning', and although none of them made the final cut for the album, some of them have appeared on one of Dylan's 'Bootleg Series' albums, including an alternate take of 'New Morning's 'Time Passes Slowly'. In 1971 he produced and played slide guitar on Badfinger's top ten hit 'Day After Day', and contributed dobro to Billy Preston's 'I Wrote a Simple Song', while in 1972 he added guitar to Harry Nilsson's 'You're Breakin' My Heart'. The following year he appeared on Cheech & Chong's 'Basketball Jones' from their 'Big Bambu' album, and 1973 also saw him add guitar to 'Waiting For The Band' from Nicky Hopkins' 'The Tin Man Was A Dreamer' under the name of George O'Hara, and 'If You've Got Love' from 'It's Like You Never Left' by Dave Mason under another of his pseudonyms, Son Of Harry. Lastly from 1973, Hari Georgeson helped out Alvin Lee & Mylon LeFevre on 'So Sad (No Love Of His Own)' from their 'On The Road To Freedom' album. 1974 was a bit quieter, with Harrison co-writing 'Far East Man' with Ronnie Wood, and both artists recording their own versions of the song, with Wood's coming out first on his 'I've Got My Own Album To Do' release. Also in 1974, two-man band Splinter released their debut, Harrison-produced album 'The Place I Love' on his Dark Horse label. It was actually the first record to be released on the label, and Harrison played guitar and keyboards on it as well, with the record spawning the hit single 'Costafinetown'. In 1975 Harrison expanded his horizons and added guitar to Tom Scott's jazz album 'New York Connection', rounding off nicely his extra-curricular activities from the first half on the 70's. Harrison then took a break while he released solo albums of his own, with his next guest appearances being in 1981 on an album from Mick Fleetwood and a single by Ringo Starr. 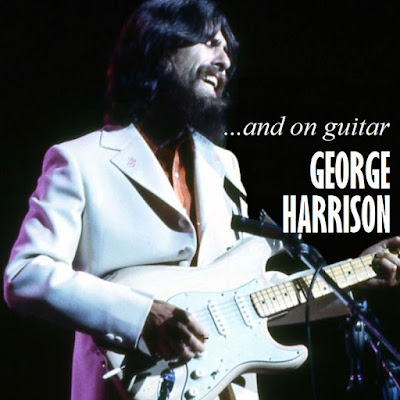 For Mac users: after the file is unzipped the folder will appear empty inside. Press command+shift+period (to show hidden files) and a grayed out folder '...and on guitar' will appear and the mp3s will be inside. Either drag those to another folder or rename the folder to 'and on guitar'. Press command+shift+period to once again hide the hidden files.
Posted by pj at 09:48