As a fitting finale to my posting of the complete Rutles discography I give you the Rutles answer to the Beatles 'Love' album. Painstakingly put together over a number of years by a fan with way too much time on his hands, this album is the perfect way to close the series. There are loads of notes and the history of the making of the album included in the folder, so do read his account of making this masterpiece.

'LUNCH' is a unique collaboration between Rutle Corps and Circle of Hay celebrating the musical legacy of The Rutles. A legacy that will last long after other musical legacies have ended.
Born from a personal friendship and mutual admiration between now-retired Stig O'Hara and Circle founder Captain Liberty, 'LUNCH' brings the manic energy of Circle of Hay together with the spirit and trousers behind the semi-legendary Prefab Four to create a vivid, intimate and powerful entertainment experience.
The southwestern cast of actors, riders and dancers channel a raw, amateur energy underscored by performance, rodeo and country square dance. With stereophonic sound and stereoscopic visuals, the audience experience The Rutles as not-quite before...

In the nearly 40 years since The Prefab Four - The Rutles - released their final album, "Shabby Road", the world has probably changed. Men walked on the moon and then gave it up, finding that they could bounce higher and faster on backyard trampolines. The Soviet Bloc toppled like dominoes...except that, with Communism being inherently classless, the dominoes were all unnumbered. The recording industry, always a numbers game, stunningly found itself unable to go truly digital - where only 2 numbers are required.
After being asked by aging A&R man Archie Macaw to make experimental mixes from The Rutles' master tapes for a collaboration with Circle of Hay, Stumpy Mountbatten, the son of Rutles manager Leggy Mountbatten was shocked to discover The Rutles' original tapes had vanished. Fortunately, 2 Rutles CDs were still in print and provided the material to create 'LUNCH'. Working with these CDs and a computer his father bought surplus from the East Adelaide Primary School, Stumpy has created a unique soundscape. This album, which was featured in the Circle of Hay/Rutles collaborative production of the same name at Tulsa's Central Community Center, has been hardly expected.

Never ones to celebrate anniversaries, The Rutles are back because, well, why not? 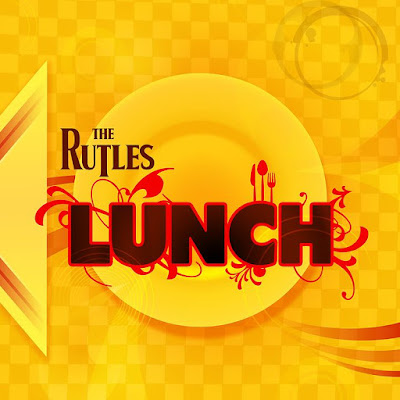 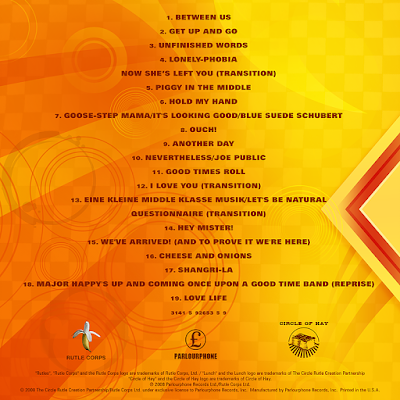 Email ThisBlogThis!Share to TwitterShare to FacebookShare to Pinterest
Labels: The Rutles