The Graham Bond Organization - Strut Around (1966)

The Graham Bond Organization were one of the first ever jazz-rock bands, and a training ground for musicians who would later go on to achieve huge success with other groups. The original line-up included Ginger Baker on drums, John McLaughlin on guitar (later replaced by Dick Heckstall-Smith on tenor and soprano sax), and Jack Bruce on bass, as well as Bond himself on organ, alto sax and vocals. Their energetic live sets of raucous r'n'b mixed with jazz earned the band a reputation of being one of the best bands of the early 60's, and in 1965 they released the ground-breaking album 'The Sound Of '65', which included their hit version of the classic 'Wade In The Water'. Never a band to play by the rules, they played themselves in the movie 'Gonks Go Beat' in 1965, playing two of their numbers in the film, and their 'Lease On Love' single from the same year featured one of the first uses of a Mellotron on disc. The band was always a volatile working environment, with widespread drug abuse, and an ongoing feud between Bruce and Baker, which eventually resulted in both of them leaving and reconciling long enough to form Cream with Eric Clapton! Bond and Heckstall-Smith reformed the group as a trio with John Hiseman on drums, but it was never the same, and internal problems and the ever-present drug issues caused the band to disintegrate in 1967. Bond carried on making music for the next few years, but seemed to be increasingly obsessed with Black Magic, and his mental health was the subject of some speculation, particularly after his death in 1974, when he fell in front of a train at London's Finsbury Park tube station. Let's remember him and the band at their peak with this collection of rare tracks from 1964 to 1966. 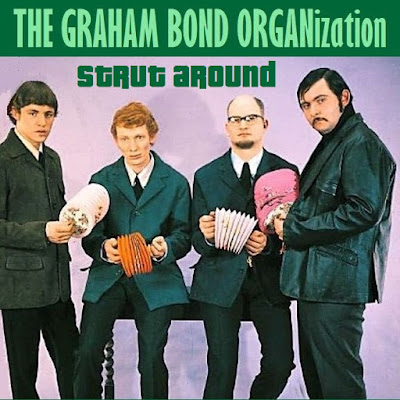 Email ThisBlogThis!Share to TwitterShare to FacebookShare to Pinterest
Labels: The Graham Bond Organization