Larry Coryell was born Lorenz Albert Van DeLinder III in April 1943 in Galveston, Texas, and was encouraged by his mother to learn piano when he was four years old. In his teens he switched to guitar, and after his family moved to Richland, Washington, he took lessons from a teacher who lent him albums by Les Paul, Johnny Smith, Barney Kessel, and Tal Farlow. He graduated from Richland High School, where he played in local bands the Jailers, the Rumblers, the Royals, and the Flames, and after that he moved to Seattle to attend the University of Washington. In September 1965, he moved to New York City, and his first major excursion into professional music was when he replaced guitarist Gábor Szabó in Chico Hamilton's quintet. In 1967–68, he recorded with Gary Burton, and during the mid-1960's he played with the Free Spirits, his first recorded band. In the eary 70's he led the group Foreplay with Mike Mandel, although the albums from this period, 'Barefoot Boy', 'Offering', and 'The Real Great Escape', were credited only to Larry Coryell, but he also lent his guitar skills to albums by Herbie Mann, Jim Pepper, and Leon Thomas, as well as showing that he didn't just play jazz by appearing with Jimmy Webb on his 1971 'And So: On' record. He formed his best-known band The Eleventh House in 1973, and recorded a number of well-received albums with them, and at the same time also managed to fit in guest appearances on records from Michael Urbaniak, Lenny White, and Larry Young. In 1979 he formed The Guitar Trio with John McLaughlin and Paco de Lucia, and the group toured Europe briefly, but in early 1980, his drug addiction led to his being replaced by Al Di Meola. Coryell died of heart failure on February 19, 2017, in a New York City hotel room at the age of 73. He had performed at the Iridium jazz club in Manhattan on the preceding two days. There were too many great tracks from him to cut them down to a single album, so this is a double disc post, with seven shorter pieces on Disc One, and Disc Two including a couple of extended workouts. 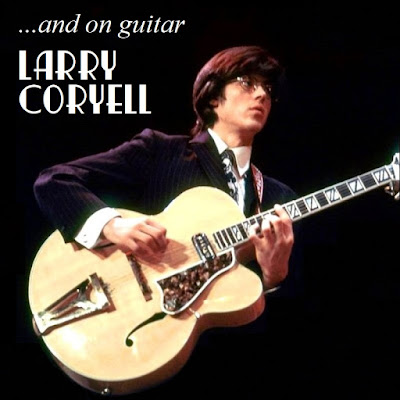